(PHOENIX, AZ, 6/3/2020) – The Arizona chapter of the Council on American-Islamic Relations (CAIR-Arizona), RM Warner Law PLC and Price Law Group APC, today announced the filing of a First Amendment lawsuit against Scottsdale Community College on behalf of a Muslim student who was punished for refusing to agree with an anti-Muslim professor’s unconstitutional condemnations of Islam during a Political Science class.

During a World Politics course at the college with a module on “Islamic Terrorism,” Professor Nicholas Damask repeatedly condemns Islam as a religion that teaches terrorism. The professor also declares that peaceful interpretations of Islam are false: “Contentions that Islam does not promote warfare or violence cannot be supported on either theological or historical grounds.”

The course’s only reading material are articles written by anti-Islam extremists Raymond Ibrahim and Walid Phares.

Finally, the professor requires students to express agreement with his anti-Islam views in order to pass the course. On a multiple-choice examination, students must declare that “contemporary terrorism” is exclusively “Islamic,” as opposed to “rightwing/fascistic.”

The test also asks, “Where in Islamic law and doctrine is terrorism encouraged?” A Muslim student who selected the option “Islam does not encourage terrorism” was marked incorrect, and failed the test.

Last month, the student posted screenshots of the biased test questions on social media. The posts quickly went viral, sparking a nationwide backlash against the college for condoning the Islamophobic materials. Scottsdale Community College issued an initial apology, saying that the questions were “inappropriate.”

Despite the college’s apology in the aftermath of the social media incident, the professor and the Maricopa County Community College District effectively retracted the apology – citing the professor’s “academic freedom” as a priority.

“The First Amendment forbids public schools from condemning religion, declaring one negative interpretation of a religion to be the only true interpretation, and then punishing students who refuse to agree with such bigotry. In addition to violating the Constitution, Professor Nicholas Damask put the safety of Muslim students at risk by teaching that the only true and acceptable interpretation of Islam gives all Muslims a ‘mandate’ to kill anyone else.”

In a statement, Raees Mohamed of RM Warner Law added:

“Professors are not entitled to inject their personal animosities against any religion as part of instruction, much less to punish a student for refusing to agree with them. The Establishment Clause of the First Amendment was intended to prevent the precise type of Islamophobia being taught by Damask at Scottsdale Community College. Academic freedom is not a free-pass to violate the United States Constitution. We’re confident in our position and look forward to judicial intervention.”

“In recent months, we have seen a massive uptick in incidents like this in the education system – whether it is K-12 or in a college setting. We cannot allow bigoted professors to indoctrinate the next generation of students with patently false and bigoted information presented as absolute fact. Who knows how many students’ perception of Islam and Muslims have been tainted by materials like this, and how many Muslim students have been punished for refusing to condemn their own religion.”

David Chami is the managing partner of litigation at Price Law Group.  His practice focuses on consumer and civil rights law

CAIR-Arizona is a chapter of America’s largest Muslim civil rights and advocacy organization. Its mission is to enhance understanding of Islam, protect civil rights, promote justice, and empower American Muslims. 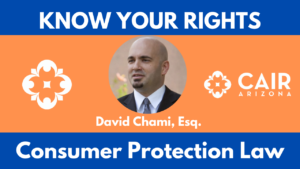 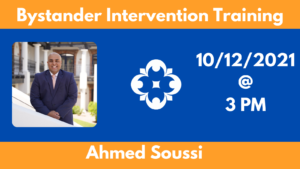